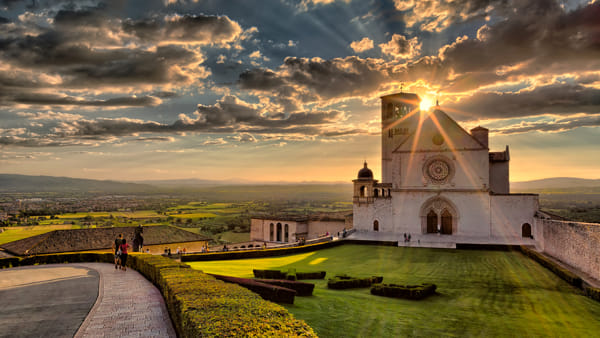 Umbria – The green heart of Italy

Umbria, region, central Italy, including the provinces of Perugia and Terni. It lies roughly equidistant between Rome (south) and Florence (north). The modern region takes its name from the Umbria of Roman times.
The Roman emperor Augustus made Umbria (together with the district of Ager Gallicus) one of the 11 regions into which he administratively divided Italy in the 1st century bce. After the Lombard invasion in the 6th century ce, most of the region was incorporated in the duchy of Spoleto, but part remained in Byzantine hands until the establishment of the temporal power of the Holy See. Later rivalry between the popes and the Holy Roman emperors gave rise to conditions that favoured the emergence of communes, and Perugia became the dominant city-state of Umbria. The campaigns of Cesare Borgia and Pope Julius II in the 15th and early 16th centuries won back most of the towns for the Papal States, and in 1540 Pope Paul III finally subdued Perugia. The expression “Province of Umbria” embraced the modern region (minus Orvieto) and Rieti in the late 17th century and was extended to include Camerino in the 18th. Umbria was attached to the Roman Republic in 1798, restored to papal rule in 1800, and incorporated into the French Empire in 1808. Under papal rule again from 1814, the “Legation of Umbria” comprised the “delegations” of Spoleto, Perugia, and Rieti until its occupation by the forces of Sardinia-Piedmont in 1860. Under the Kingdom of Italy (from 1861) the region had only one province, that of Perugia, until that of Terni was created in 1927.

While Umbria has some interesting monuments of the Roman and early medieval periods, such architectural glories as the cathedrals of Assisi and Orvieto and palaces such as those of Todi, Perugia, and Gubbio were built during the medieval Gothic period, some embellished by the greatest artists of the 13th and 14th centuries. During the Renaissance, Umbria once more occupied a place of honour in the creative arts as the home of the Umbrian school of painting, with such masters as Perugino and Pinturicchio.

Umbria’s core is the upper and middle valley of the Tiber River, flanked on the west and east by low hills that gradually rise in the east to the Umbrian-Marchigian Apennines. The characteristic feature of the region’s physiography is the prevalence of wide basins, some of lacustrine origin (Lake Trasimeno), some being sections of river valleys, and others small, isolated depressions such as the plains of Gubbio and Terni.

Farming in the hills and valleys is prosperous and is characterized by intensive land use, especially intercropping. Wheat, corn (maize), potatoes, sugar beets, grapes, and olives are grown, and the wine of Orvieto is known throughout Italy. Livestock raising is extensive. The major power centre of Umbria is the hydroelectric complex of Terni, which supports steel, chemical, and electrochemical industries at Terni, Narni, and Foligno. Textile and food industries at Perugia, the regional capital, are important. The region is served by two major rail lines from Rome and has an excellent system of highways and bus communications.

Spirituality – The way of Saint Francis. The therapeutic sanctuaries of Umbria: miracles, nature, history and art. Faith itineraries of Saint Francis, Saint Claire, Saint Benedict, Saint Rita and Saint Valentine, and many others.

Food and wine – A holiday dedicated to taste: come in Umbria to discover the unique traditional flavour, result of the combination between food and wine excellencies and typical products that will be a real delight for your palate.